Scoop! of Plaid: Is Barack Obama the MacChurian Candidate? 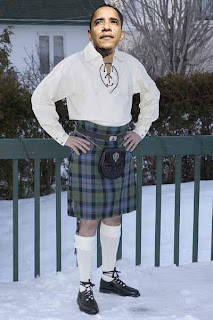 The Alameda Daily Noose and I recently obtained this shocking candid photograph of Senator Barack Obama, presumably relaxing on the back deck of his Chicago home. We already knew that he was Soft on Squirrels, though not to the same extent as his primary opponent, John McCain, but this latest evidence of un-Alamedan leanings makes us even more suspicious of him. Could Obama be, as suggested in the numerous interweb rumors that we are about to spread, a Secret Scotsman?

Now, some of you Bagpipe-huggers out there are probably muttering to yourselves in that thick, unintelligible accent of yours, "Ach, one wee photo of Obama in a kilt proves naught! Perhaps he was merely visiting the home of some Scottish friends and dressed in their native garb out of courtesy and respect." Sadly for Alameda, this damning photo is no isolated incident.

The connection between Obama and kilts dates all the way back to April 25, when a Scottish propaganda rag called, appropriately enough, The Bagpiper endorsed Barack Obama for President. The ugly association resurfaced on June 20, when an Australian newspaper revealed his connection to the "kilt-clad lawyer, Montgomery Blair Sibley."

Viewed alone, each piece of evidence might appear inconclusive; however, if one connects these three dots, one is confronted with a Triangle of Absolute Proof that Obama is a Secret Scotsman who is only pretending to have the best interests of Alameda at heart, but who will seek to overturn our beloved Tartan-Limiting Measure Angus, colloquially known as "Measure Angus," as soon as he takes the oath of office, which will undoubtedly be sworn on a book of Robert Burns' favorite haggis recipes instead of the Bible.

The Alameda Daily Noose and I have shown you the havoc that Bagpipes, once unleashed, can wreak on an unsuspecting Alameda. Is Barack Obama some kind of MacChurian Candidate, secretly taking orders from his kilt-clad Scottish handlers? Possibly. And that's a risk we can't afford to take. Write in Mike Huckleberry for President and Heidi Wilson for Vice President!