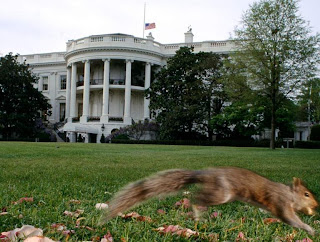 The Alameda Daily Noose and I were so wrapped up in listening to the backwards messages in the tape of last night's Council meeting that we almost missed another story of great importance to Alamedans everywhere: Assailed by dirty tricks from Squirrels in the employ of front-runner John McCain, brave Right-Thinking candidate Mike Huckleberry was forced to withdraw from the Republican primary race at 9:15 p.m. last night, Tuesday, March 4, 2008.

It was a sad day for the great nation of Alameda, but the worst is yet to come. All of the other so-called candidates are certifiably Soft on Squirrels, which means that it is only a matter of time before Big Arborist is running our country, ramming 100-foot trees down our throats. Hoards of acorns will be stored in the Lincoln Bedroom, and every State of the Union Address will consist of two straight hours of unbearably tedious chit-chit-chittering.

Our only hope now is to prevail upon one of the remaining candidates to select as a running mate the only other person in the country who can save us all from the Sciurine Scourge. Yes, we refer to none other than the Bane of All Squirrels, the Mighty Huntress herself, Miss Heidi Wilson. With Miss Wilson at the next president's side, we could once again sleep at night, and even during the daytime. With her just a heartbeat away from the presidency, we could be sure that the Squirrels wouldn't dare make a false move. That is why the Alameda Daily Noose and I are devoting all of our vast political influence to ensuring that Miss Wilson is the top choice for whichever candidate manages to dishonorably claim the title of President that should have gone to our hero, the one and only Mike Huxtable.