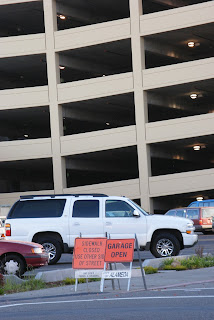 The City of Alameda just spent millions of dollars for a new garage that nobody wanted, and yet they couldn't afford a better sign than the pathetic sandwich-board shown in the exclusive Alameda Daily Noose photo above. Come on! Don't the people of Alameda deserve better notification than that?

The letters on the sign are so small that it took over a week for the Alameda Daily Noose and me to even realize that it was anything other than another annoying warning of the street closures that have plagued that section of Oak Street since the start of garage construction.

It's obvious that everyone else has been ignoring the new sign, too. Our Alameda Daily Noose photo clearly shows that the good, honest parking lot is full, whereas the evil, developer-driven garage is empty. Not only is the garage clearly badly built, and in danger of falling down in the slightest earthquake, but you have to pay to park there, too. Get real!