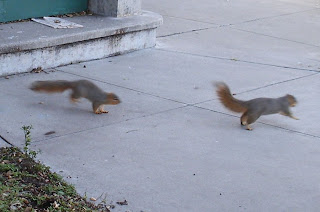 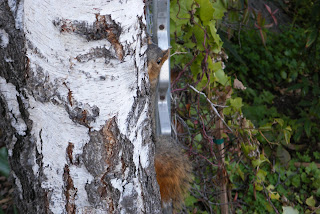 Alameda's Squirrel population is clearly getting agitated. The Alameda Daily Noose and I barely escaped with our lives after a recent close encounter. We shudder to think what could have happened if we hadn't had the presence of mind to shout "Hucklebee!" until the whiskered miscreants were frightened off.

Mike Huxtable's recent victories in Kansas and Lousiana, adding to his stunning wins throughout the Squirrel Belt, sent a clear message that voters are not going to stand silently by while the Furry Menace engulfs our great nation. Once Huckleberry becomes President, Squirrels will no doubt stream away from the heart of the country, i.e., Alameda, and cower at our borders, seeking sanctuary in Squirrel-coddling neighbor nations like Canada, Mexico, and Scotland.

Some candidates have indicated that they would cut and run in the Global War on Squirrels, whereas some have said they are willing to fight for 100, 1,000, 10,000, or maybe even 1,000,000 years. Lightweights! Setting a timetable for surrender just means the Squirrels move in for the kill in year number 1,000,001. We are at war, and Mike Hucklebee knows how to keep it that way…forever!