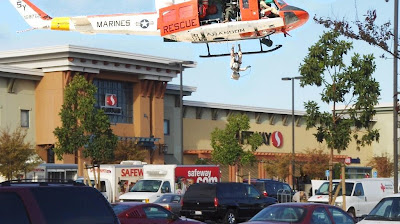 The Alameda Daily Noose and I have never been inside the store ourselves, but we happened to be parking in front of the new Super-Mega-Monster Safeway That Everyone Hates on Saturday, when it became the scene of a daring search-and-rescue operation.

According to authorities, it all began last Friday evening, when Dave and Nancy Perdu and their two children, Sierra and Dakota, embarked on what they thought would be a simple trip to the grocery store. Unaccustomed to the massive scale of the Super-Mega-Monster Safeway That Everyone Hates, the family took a wrong turn in the bakery section and found themselves traveling down a deserted aisle, surrounded on all sides by a harsh landscape of frozen foods. Before they could turn back, their cart developed a severe case of "wobbly wheel" and crashed into the Totino's Pizza case, leaving the family stranded.

The Perdu family tried to call 911, but they were deep in one of the remote areas of the Super-Mega-Monster Safeway That Everyone Hates that are still without cell phone coverage. As darkness fell, they spent a Thursday night huddled around the cart for warmth, hoping to be spotted by a passing shopper.

As Friday passed without any sign of help, the situation grew desperate. Knowing that his family would soon exhaust the last of the meager provisions in their cart, Mr. Perdu decided he had no choice but to set out on his own in hope of reaching civilization before it was too late. Due to the enormous size and confusing layout of the store, he was soon out of earshot of his family.

Meanwhile, a friend who became concerned when Mrs. Perdu failed to show up for their regular Friday pinochle night alerted the authorities. As the exclusive Alameda Daily Noose photo above shows, a U.S. Marines search-and-rescue helicopter, a Red Cross medical van, and two trucks from the Safeway Grocery Emergency Response Team were the first to arrive on the scene. These heroes braved the impossible parking conditions outside the Super-Mega-Monster Safeway That Everyone Hates in order to position themselves for a full-scale search of the enormous store.

Unfortunately, rescue efforts were hindered by the fact that the store's ceiling was too low for safe operation of the rescue chopper. "If only it was ten or fifteen feet higher…the kids…" said Marine Aviator Jim Lederhals, visibly shaken, "If…if they don't make it, those pencil-necked bureaucrats on the Planning Board who approved this thing will have blood on their hands!"

With the helicopter hovering helplessly outside, the Grocery Emergency Response Team sent in its pack of bloodhounds. The dogs picked up a strong scent and wound their way through the labyrinth of aisles, but hopes were dashed when they dragged their exhausted handlers first to the butcher's counter, and then to the pet food aisle.

After a full day of fruitless searching, a stroke of luck came in the form of a young stockboy, Darryl Melton, who encountered a disoriented man, near collapse from dehydration, with his right foot stuck in a 2-1/2 gallon tub of Ben & Jerry's Dave Matthews Band Magic Brownies Encore Edition. Mr. Melton was able to call for help on his high-powered Safeway-issued walkie-talkie, and the rescue teams then traced the trail of ice cream drips back until they could hear the sobs of the Perdu children still waiting with their mother by their stricken shopping cart.

Following a tearful reunion in the Red Cross van in the parking lot late Sunday, the Perdu family was airlifted to Alameda hospital, where they were treated for dehydration, frostbite, and post-traumatic shopping syndrome. Doctors expect all of the family members to make a full recovery.