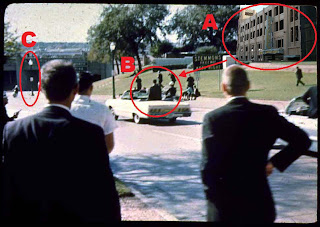 There have been a lot of shocking photos of the Super-Mega-Monster-Plex That Everyone Hates in the major news media lately, but none as shocking as the exclusive Alameda Daily Noose photo we bring you today. The Alameda Daily Noose and I had invited our neighbors, Mildred Bolus and her husband, what's-his-name, over to watch some slides of our vacation in Dallas back in November 1963. We shot many pictures of the terrible traffic jam we saw there, which reminded us of something from a "Looney Tunes" short.

Right in the middle of our slide show, Mildred's husband jumped up and shouted, "Look! You've solved the mystery of who really shot J.F.K.! This photo is the proof everyone's been looking for!" He whipped out a red marker and started writing on the screen. "You see, here, on the grassy knoll stands the Super-Mega-Monster-Plex That Everyone Hates, which I've marked 'A.' This arrow shows that there is a clear shot from this position to the presidential motorcade, 'B.' And, as if you needed any more proof, there's the lamp post, which I've marked 'C.' Does it look familiar, Rog?"

I was dumbstruck. The lamp Midred's husband had circled was the exact type of lamp post that was recently installed in front of the Super-Mega-Monster-Plex That Everyone Hates. What's-his-name was right: It all falls into place! Now, this is not the first time that the Super-Mega-Monster-Plex That Everyone Hates has been implicated in a murder, but up until now, the proof has been elusive. Our vacation snapshot, however, proves once and for all that this parking garage has not only killed before, but also framed an innocent man, Lee Harvey Oswald, for the crime. Clearly this is the work of an evil structure whose elevator does not go all the way to the top floor!

I knew it! The Godzillaplex should be arrested immediately and taken into federal custody. Thus killing two birds (pardon the pun) with one stone. Solving the JFK murder mystery and restoring the cherished and sainted view of the Twin Towers Church.

As always I remain,
NoFactsDave

To help you get a great deal of entertainment out of your iphone 4, you should discover how to work with an application. Apps are a fantastic resource and there are many accessible, but often individuals are ignorant, of how they may enable you to. Hunt for information and facts on the web about every one of the latest apps and find out if they can create your exposure to the iphone 4 much better. [url=http://www.x21w12w21.info]Ilghss231[/url]