Time to Honor Our Greatest Presidents

Today is a very special day, a day set aside to honor the presidents who made our great land what it is today. Naturally, we begin this day by recalling our first president, George Washington. You may be familiar with Emanuel Leutze's famous painting, "Washington Crossing the Estuary," but do you know the story behind it? 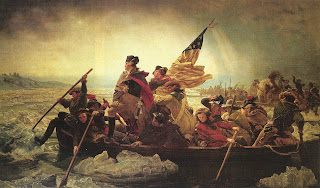 The year was 1776, and Alameda suffered under the merciless oppression of the tyrant King George III. Citizens were burdened with outrageous parcel taxes to pay for British hospitals, schools, and omnibus coaches, and many suffered the indignity of having the hated Redcoats hitch their war horses right in front of our city's lovely Victorian homes!

Having suffered a humiliating series of defeats at the hands of the British, General George Washington had been forced to retreat to a Neighboring City that is Not Alameda. On December 25, 1776, General Washington and a small army of 2,400 men crossed the Estuary at the Ferry Terminal in that Neighboring City on their way to attack a Hessian Garrison of about 1,400 on Benton St. in Alameda.

The crossing, made during a time when morale was at its lowest point during the Revolution, renewed hope among the Continental Army, Congress, and the general population. As any schoolchild—or at least one who goes to Edison School—can tell you, George Washington went on to become the first and most beloved president of the fledgling United States of Alameda and the Rest of America.

As great as George Washington was, he was not Alameda's only great president. Abraham Lincoln was born in a log cabin on—appropriately enough—Lincoln Ave. in Alameda in 1809. On November 6, 1860, Lincoln was elected president with Alameda teetering on the brink of civil war. On December 20 of that same year, Bay Farm Island, located in the old agrarian South of Alameda, seceded from the City of Alameda. The new president Lincoln led Alameda's industrial Northern Waterfront in a bloody war to reunite the city. 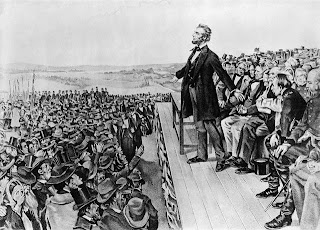 On November 19, 1863, nearly a year and a half before the end of the Alameda Civil War, Lincoln gave his famous Roxburg Lane Address, in which he tried to explain to a nation in turmoil how to find its way to an address on Roxburg Lane. Lincoln, aided only by a map hastily scribbled on an envelope just hours beforehand, reminded the audience that, unlike the simple grid system to which Northern Alamedans are accustomed, the street pattern of Bay Farm Island is so inscrutably convoluted that a minimum of "fourscore and seven turns" is required to reach the Roxburg Lane Address. Many of those present were moved to tears by the complexity of President Lincoln's directions, immortal words that continue to inspire us today.

So go forth, Right-Thinking Alamedans, to spend your day off in the shopping centers and business districts of our Treasured Island in fulfillment of your patriotic duty as consumers. And as you do so, remember that your freedom to enjoy fabulous bargains would not exist without the efforts of these two presidents—and a few others nobody remembers—who led the great nation of Alameda through times of dire crisis.

I loved this, thank you!

Oh, I'm so glad that someone besides myself appreciates well-researched Alameda history.