When Evil Red Squirrels Battle Evil Scottish Developers, Just Whose Side is a Right-Thinking Alamedan Supposed to Take? 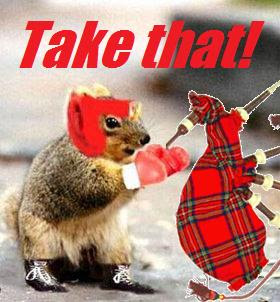 Once again, the Alameda Daily Noose and I have scooped all of the other major news media by being the first to report—well, OK, the first to report in a soon-to-be-award-winning daily noosepaper—that the exodus of Squirrels from Alameda is causing confusing repercussions around the globe. Apparently, a group of Sciurine Communists has single-pawedly stopped an entire housing development in the weak, Squirrel-coddling nation of Scotland.
The backward island nation of Scotland, which lacks both Alameda's Squirrel-limiting "Measure Acorn" and Alameda's Tartan-limiting "Measure Angus," is defenseless not only against Squirrels but also against Bagpipes. Paradoxically, by allowing Squirrels to get the upper paw, Scotland has actually prevented the construction of more high-density housing for Scotsmen, which, as all Right-Thinking Alamedans know, leads inevitably to a plague of Bagpipes.
The Alameda Daily Noose and I are used to sharp distinctions and easy answers. We find it extremely disturbing that we are unsure whether we should root for the Evil Communist Squirrels for battling the scourge of Tartan-oriented development, or applaud the Evil Developers for plotting to destroy the secret bases or "dreys" of the Evil Squirrels. Our uneasiness is proof that there is something terribly, terribly wrong with the country of Scotland, and only reinforces our belief that "Measure Angus"—together with "Measure Acorn"—is the only thing that can save our Treasured Island.