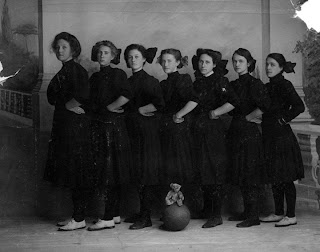 Just as the Alameda Daily Noose and I predicted over a fateful beer way back in November, the Alameda High School women's varsity basketball team was undefeated in the games of the 2007-2008 season, held on November 29 and 30, December 6, 7, and 8, January 18, 25, 26, 29, and 31, and February 7, 8, 12, and 19, for an unbeatable total of 14 of 14 games won. As you can see from our exclusive Alameda Daily Noose file photo above, the ladies of A.H.S. have always known how to celebrate a victory!
Of course, it in no way tarnishes the success of the Lady Hornets, nor the accuracy of the Alameda Daily Noose's and my prediction, to note that these Right-Dribbling Alamedans lost the 10 games held on December 1, 11, and 14, January 8 (two games) and 15, and February 2, 5, 15, and 22. While some egghead athletic academics might claim that these are technically "defeats," we know that they are merely the exceptions that prove the rule.
We would say that the Lady Hornets deserve some kind of award for their perfect record, but their effort pales in comparison to the hard work the Alameda Daily Noose and I put into making our 100% successful prediction of how the season would play out. So congratulations to us…as the Alameda Daily Noose and I always say, it's not how you play the game, it's whether you were Right or Wrong!