I must say, I was taken aback by Mr. Kirkland's violent overreaction to my modest peat bog proposal. Mr. Kirkland may long for auld lang syne, before Scotsmen ever found their way to Alameda's bonnie shores, but all of his wishing won't change the Association of Bay Area Governments' Projected Immigrant Population Estimate, or ABAGPIPE. According to ABAGPIPE, Alameda must accommodate its fair share of approximately 3,979 additional Scotsmen by 2025.

Sadly, Alameda's record so far is abysmal: It has only managed to house 27% of its fair share of Scotsmen from 1995 to 2005, earning it a grade of "F" from the Bay Area Scottish Council. Some have argued that Alameda's Tartan-limiting "Measure Angus" is largely to blame.

Many things have changed since "Measure Angus" was passed in 1893. I won't deny that bagpipes are still a concern, but recent innovations in the new field of Tartan-oriented development (TOD) allow the clustering of Scotsmen around so-called Tartan nodes, where a colorful interweaving of different land uses and transportation options allows Scotsmen to board convenient public transport vehicles instead of striding endlessly around the bogs, playing their bagpipes. Here are some photographs that illustrate the exciting TOD concept in action: 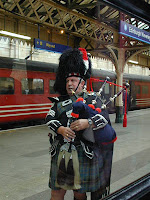 These quiet, modern ferries and trains whisk the Scotsmen to their destinations in air-conditioned, sound-insulated comfort. Study after study has shown that Scotsmen living in Tartan-oriented developments own fewer bagpipes per household and play them less often than those living on the sparsely populated heaths commonly known as "Scottish sprawl."

Just a wee modification to "Measure Angus," geographically limited to the peat-friendly area of Alameda Point, would allow for the kind of Tartan-oriented development that will enable Alameda to accommodate its ABAGPIPE fair share of Scotsmen in a way that enriches the whole community while minimizing the perceived impact of bagpiping.