There he goes again. Roy Avery tries to play sweet and innocent, claiming that he only wants a "wee" modification to Alameda's Tartan-limiting "Measure Angus," just for Alameda Point. Well, that is just the camel's nose under the kilt! Make one "wee" exception and pretty soon every Scotsman in Alameda will be asking for his own peat bog, and taking it all the way the Supreme Court!

Furthermore, I just snapped a picture that proves that so-called Tartan-oriented development is nothing but a pipe dream...a bagpipe dream, that is! Sure, Roy Avery would have us believe that Scotsmen are going to leave their bagpipes at home and take public transit, but he neglects to mention that only 30% of Scotsmen will ever take quote-unquote transit. That means 70% will drive their cars, and, as my photo clearly shows, they will all demand special bagpiper parking places! And I don't even have to tell you what kind of horrible effect a drive-by piping can have on The Children. 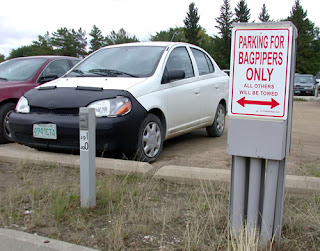 You know what? I would not be surprised at all if the white car in the photo belonged to none other than Roy Avery! Yes, he claims to be a big so-called transit advocate, but then he puts his bagpipes in the trunk of his automobile, which I'm 100% certain he drives to work every day! You don't see him trying to fit those bagpipes into the basket of his bicycle, do you? Roy Avery is just like all of the other people who are out to destroy "Measure Angus." What a bunch of hypocrites!

Oh, and did I mention that Alameda is an island? Study after study, including an extensive survey conducted by the prestigious Royal Board of Ordnance, has shown that Scotland is most certainly not an island. That means quote-unquote Tartan-oriented can never work here. I rest my case.

You can talk about measure Angus all you want, but the real danger here is when a scotsman lives and works in his kilt. I think we should outlaw all live work kilts.