Now Jean Kerkwilligers KNOWS what the big deal is! 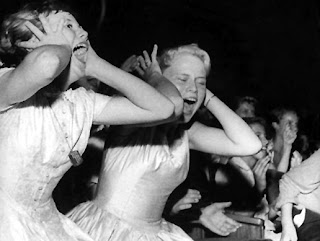 Dear Roger,
FINALLY I understand what the big deal is! Writing to the Daily Noose yesterday is the best thing I've ever done. It has completely changed my life. Just five minutes after my letter appeared in your paper I heard the most awful "chop chop chop" sound out in the back yard. The plants in my garden were blowing around like crazy! I went out there and I saw not one but TWO news helicopters hovering over my house, trying to get a close-up! Unfortunately I was still in my curlers and bathrobe, so I hope they'll be back tomorrow for a better shot.
Of course, the very next thing I did was to head downtown to get my nails done. I have to look great the next time those reporters show up! Anyway, the ladies at the nail salon were absolutely abuzz! One of the younger ones fainted when I walked in. They were flitting around me like butterflies, asking if I knew Rog, asking what it felt like to see my letter featured ABOVE THE FOLD as the TOP STORY in a soon-to-be-award-winning daily noosepaper...it was almost too much! And they gave me a free pedicure to boot!
Next I stopped in at that hippie grocery store to pick up some of those great dried prunes you wrote about. As soon as the nice young tattooed girl at the cash register saw my name on the check, she started acting as if she had seen that Elvis Presley fellow. "Oh my GOD, it's JEAN KERKWILLIGERS! I can't tell you how much I LOVED your letter!" She called some of her hippie friends over and I had to sign various different parts of their bodies. They said they wanted to have my signature made into a tattoo...can you imagine that? And they absolutely REFUSED to accept my check for the groceries. "For you, Mrs. Kerkwilligers, it's on the house."
The only down side is that people are constantly asking me if I've met THE famous Roger Grumbel, and is he really as handsome in person as he is on TV, and is he really as intelligent as his editorial comments make him seem, and I just hate to disappoint them by saying I don't know! Please, Roger, now that you've changed my life by printing my letter, won't you join me for tea at your earliest convenience? Please don't print the time and place in your paper, though, because I don't want those darned helicopters messing up my hair!
Finally "in the know" in Alameda,
Jean Kerkwilligers