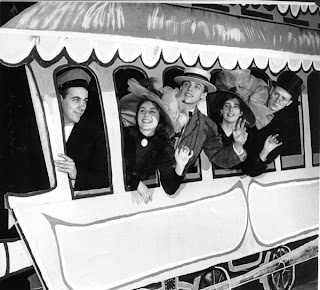 The stage version of the movie "Meet Me in St. Louis" opens at 8:00 p.m. this Friday at the Contra Costa Civic Theatre, 951 Pomona Avenue (at Moeser), in some town that is most definitely not Alameda. It will run at 8:00 p.m. on Fridays and Saturdays through August 4. Matinees are at 2:00 p.m. on Sundays July 8, 15, 22 and 29.
A good friend of the Alameda Daily Noose's and mine, Former City Council Candidate, assures us that absolutely nobody will attend this unrealistic play, which prominently features a ridiculously biased pro-transit number called "The Trolley Song." This might have worked in 1944, but today's audiences overwhelmingly prefer the convenience and freedom of private-automobile-themed musicals like "Grease." After all, who likes the idea of sharing a crowded streetcar with a bunch of people in their Sunday best, all belting out tunes at the tops of their lungs? It's downright un-American! People would much rather see someone driving alone in a Hummer, listening to Howard Stern on satellite radio. Now that's entertainment!
At any rate, ticket prices are $15.00 to $24.00, money that would be much better spent building more freeways. To complain about this theatrical outrage call 510-524-9132.