Stay the Course: Privatization Wouldn't Be Prudent at This Juncture 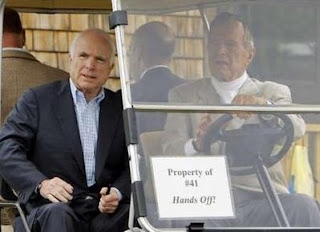 Can you believe all this hooey about the City of Alameda wanting to privatize the golf course? That is the most wrong-headed thing I've heard in a long time. Why, the only problem with the course right now is that there are too many people on it. They're so thick on the greens sometimes that you can hardly drive your golf cart! I mean, folks are getting as angry as Former President Bush and Future President McCain did yesterday, when those darned kids were blocking the path of President Bush's official vehicle, Golf Cart Forty-One.

Another problem is that the parking lot is too small for the size of course we have. The City says it wants to attract more golfers, but that would just make the parking situation worse. Besides, think of the traffic it would generate! And another thing is that more golfers would mean higher maintenance costs, so how would that help the golf course?

The real solution to these problems everyone's talking about is to leave everything exactly the way it is. Or even better, maybe they could make the golf course smaller. Two holes is about enough for anyone to get through in a day, and the extra green space could be turned into additional parking. Better yet, they could just let people drive their cars directly onto the course. That extra engine power could really speed up my game. You'd have so many Alamedans wanting to use the course then that they'd have to build a bypass to the clubhouse so nobody would get stuck in traffic on their way to quenching that post-golfing thirst.

Oh yes, and the clubhouse needs a drive-through window. Other than that, it's perfect just the way it is, so stop trying to mess things up!