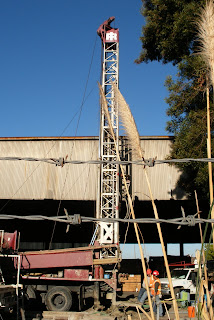 Once again, the Alameda Daily Noose and I have scooped all of the other major news media with the exclusive Alameda Daily Noose photos you see here. As anyone can see from the photo above, the Great Island Nation of Alameda has heeded our call (and Buck Morris') to "Drill Here, Drill Now."

At this point, some of our more benighted readers may be saying to themselves, "How do we know that big rig near Atlantic and Buena Vista isn't just installing a cell phone tower or laying the foundation for a gigantic Safeway store?" Well, for those who like a delicious extra sprinkle of proof on top of their Pudding of Truth, here it is: 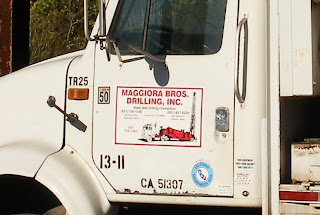 That's right, the sign on the truck says it all. They are clearly a drilling operation, and a "major" one at that, run not just by one person, but by a band of brothers. That's how big the company is. The brown liquid issuing from the ground in the top photo must be what is known as "crude oil," probably because the techniques used to extract it are not elitist and out of touch.

In fact, it looks so easy that the Alameda Daily Noose and I are thinking of checking some back yards in our neighborhood for rich oil deposits. After all, it is the patriotic duty of all Right-Thinking Alamedans to extract as much fossil fuel from the planet as possible, ferreting it out wherever it may lie, unless it happens to be under our prize rosebush. If any of our readers would like to invest in back yard drilling, we would encourage them to contact the Major Drilling company that is so hard at work in the photos above.

Yes, it will be nothing but blue skies ahead as soon as Alameda starts burning all of that fresh, homegrown oil!

the drilling rig in the picture is drilling a new water well - and not, as so incorrectly stated, drilling for oil!