New Signage to Appear Around Alameda 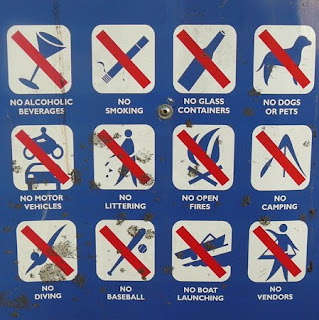 The Alameda Daily Noose and I have learned that, although throwing balls will no longer be automatically disallowed in City Parks, the City of Alameda is still reserving the right to post signage forbidding the throwing of balls, along with other activities.

Mayor Johnson said in a press conference this morning: "Our original intent in introducing the law that would ban ball-throwing outright was really a beautification effort. We didn't want to clutter up our parks with unsightly signage, so we thought it would be easier just to ban ball-throwing everywhere, to avoid the clutter—not to mention the expense—of signage."

"But the people have spoken", she continued. "If you want signage, then signage you will get. Today the City Council and I have introduced signage that will be placed in all city parks, and also posted every fifty feet along all city streets, indicating exactly what is not allowed. If that's what you want, Alameda, than that is what you get."

Major Johnson, shaking with emotion by this time, left the stage, leaving the rest of the presentation to a clearly bewildered (yet obedient) City Council.

The Alameda Daily Noose and I were able to get a picture of their example signage, unveiled at the end of the press conference, which we faithfully reproduce for you here in this soon-to-be-award-winning daily noosepaper.