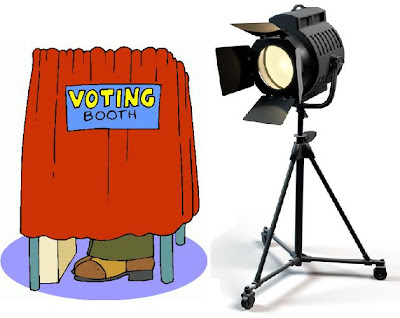 According to ancient Alameda folklore, the second day of February is a very special day. If a Right-Thinking Alamedan emerging from the voting booth on this day fails to see his shadow, he will leave the booth, signifying that the old Navy base will soon be developed, thereby ushering in Alamedageddon: the end of Alameda, and also the end of Greater Alameda (otherwise known as "the world"), as we know it. If on the other hand, the Right-Thinking Alamedan sees his shadow, he will supposedly retreat into the voting booth, and the old Navy base will remain undeveloped for six more years.

Of course, this is all a silly superstition, because we all know that everybody will be voting "no" on Measure Bagpipe today, thereby saving Alameda from the ravages of Evil Robots, "Break-Dancing," Squirrels, Bagpipes, and People Parking in Front of Our Houses. Nevertheless, we will go through the empty ritual of casting ballots and running from our shadows, because it is Traditional, which makes it Good. However, just to be on the safe side, members of Inaction Alameda will be setting up huge banks of spotlights just outside the voting booths. These lights will be capable of casting multiple shadows, so with any luck, the old Navy base will stay just the way it is for twelve, eighteen, or possibly even 24 years!