A Day to Celebrate Our Greatest Heroes 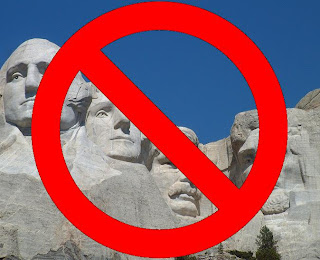 As we all know, presidents are people who try to push their agenda of change on innocent Right-thinking citizens. True Alamedans, on the other hand, understand that everything needs to stay exactly the way it was when our families first became established in this town. Whenever something changes, it has a bad effect on the residents of Alameda, just as we were negatively impacted when George Washington and his gang decided to change the perfectly good system of government that we had under King George.

Since everyone has the day off from work on this day, it is the perfect time to celebrate our rights as residents of Alameda. Just think: Resident's' Day could become a time for Alamedans to peer between the curtains, watching for anyone who might try to park in front of our house. Since the day is a government holiday already, we could be assured that no change is going to be inflicted on us by those in power. That would leave us free to revel in the complete lack of change that can come only from doing nothing.

So, of course, Residents' Day would not be a day for doing humdrum jobs like changing the furnace filter. It works just fine, so why would we ever need to change it? No, changing Presidents Day to Residents Day would be a huge improvement, teaching the next generation the importance of not changing anything.