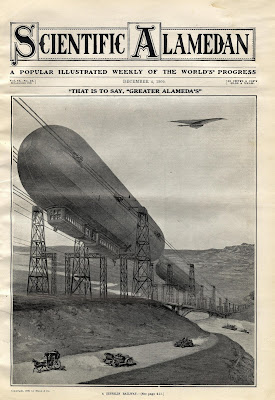 We here at the Inaction Alameda Alameda Daily Noose by Inaction Alameda understand that some people - let us call them "people who agree with us" for short - wish to divorce their local political activities from their professional life, for the sake of preserving their income, and still others - known for the sake of brevity as "people who don't agree with us" - are just plain cowards or cyber-bullies that won't put their name behind what they say, and it makes them feel strong to hurl anonymous epithets at others online.

It didn't take long for these bottom-feeders who don't agree with us to crawl up from the ooze where they reside and sully our comment section with their vile dreck. Just listen to what one of them had to say about our story about the new BART station in Alameda:

Notice how the new Park St. BART station already has signs for the so-called Air-Train? Only a week after federal grants were pulled from the Oakland Airport to Coliseum BART John Knocks Whyte and the evil forces of Big Helium got the exclusive contract to fly people aboard "Air-Trains" from the new Park St. station. These so-called "Air-Trains" are just a euphemism for those dangerous Zeppelins. I'm sure Roger Grumble would not have left a hole in a story so big, you could drive a truck through it. Roger Grumble even covered the dangerous Zeppelin mast built atop the Giant Parking Garage That Everyone Hates.

I must say that the level of integrity and intellectual curiousity of the Alameda Daily Noose has declined markedly under the editorship of Dave Williamson and his legion of InAction Alameda members.

This coward immediately loses all credibility by spelling Roger Grumbel's name wrong, then goes on to misspell "curiosity" and write "Inaction Alameda" with incorrect capitalization. There is a Zen proverb, "The way a man does one thing is the way he does everything." For those of you who don't understand the finer points of Eastern philosophy the way we do, that means that if someone who doesn't agree with us makes even one mistake when writing something, then everything he ever writes is always wrong.

Sensing what appeared to be an opportunity, a second anonymous cyber-bully piled on with this tirade:

Yes, this is OUTRAGEOUS!!!! Where is Roger Grumbel to stop these marauding Airships?

We ALREADY had blimp traffic jams on our roads before the greedy interests of Big Helium began blocking out our sun, light and air with these monstrous behemoths.

Obviously, these two cowards haven't read Inaction Alameda's ground-breaking whitepaper, "Inflated Promises: Exposing the Rising Zeppelin Threat to Alameda." This whitepaper is the culmination of minutes upon minutes of scholarly research, including multiple citations from multiple issues of Scientific Alamedan. It goes without saying that this is an internationally respected peer-reviewed scientific journal; after all, it has the word "scientific" right there in the title.

The most recent Scientific Alamedan article cited in our whitepaper covers the whole "Air Train" issue in great detail. It is dated December 4 of '09, a mere two months ago. On the other hand, the last Zeppelin story published by Roger "Grumble," the supposed hero of these anonymous cyber-cowards, was July 7 of '09, which was seven months ago, and it didn't even mention the Air Train. Clearly, these anonymous cowards don't know much about the latest developments in Zeppelins. They would be wise to keep their mouths shut and read our whitepaper, that is - if they can read without moving their lips.

As a Right-Thinking Alamedan who follows your heroic struggle against all that is unAlamedan in our society, I was wondering if you could answer once and for all whether or not this newly advertised "Air-Train" Zeppelin service from the new Park Street BART station to the Oakland Airport is really just Blimp Rapid Transit warmed over, or not?