Cindy Sherman Exposes Yet Another Case of Indoctrination in our Schools 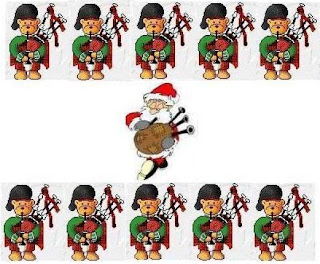 Yesterday I overheard my children singing a song they had learned at school. What began as a seemingly innocent song about a series of Christmas presents took a disturbing turn when "eleven pipers piping" were mentioned not once but twice. I did some quick research on the Google, and my worst fears were realized. Just look at what I found on some interweb page:

The pipers referred to in the song would be the professional bagpipe musicians hired to entertain the guests with their music and provide music for dancing.

Just as I suspected! The mention of "pipers piping" was not some innocent reference to plumbing, but rather a clear case of Bagpipe indoctrination in our schools!

This may be hard for Right-Thinking Alamedans to believe, but the idea that the Tartan Agenda would be forced down our throats was openly discussed by rabid Bagpipe-huggers like Roy Avery over a year ago, in the run-up to the presidential election. Unfortunately, Alameda ignored these warning signs and put that Secret Scotsman Barack Obama in the White House, and now those Tartan-clad, Bagpipe-playing chickens are finally coming home to roost.

This brings me to Measure B. Bagipes are a Bad Deal for Alameda. Vote no on Meausure B!

Thanks for pointing this out. I've been troubled for years by the inherent sexism in the milking maids and leaping lords, not to mention the violation of animal rights involved in the gifting of all those different kinds of avian creatures. And who knows whether the gold for the rings was mined in an environmentally sustainable fashion. Talk about indoctrination!