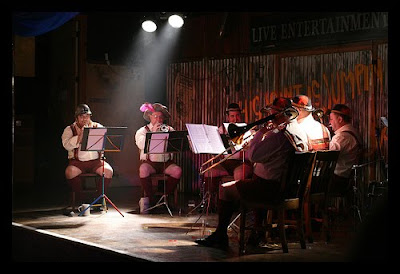 In an attempt to compete with the fancy-schmancy new restaurants that keep opening up downtown, the venerable Gym's Coffee Clutch has announced that it will be staying open late on Monday nights to offer patrons a chance to experience Alameda's exciting music scene live on their new stage, which they constructed by dismantling the salad bar. "Nobody was using that thing anyway," said Roland Dunkelbauer, former all-Alameda bodybuilding champion and owner of Gym's, "and we were able to re-use a lot of the lumber, which we believe will be sturdy enough to support the considerable musical heft of Alameda's own 'Ja, und das ist Polka!' band." Their first performance will be Monday, December 21, from 7:00 to 8:00 p.m.

"We realize this is pretty late at night for a lot of our regular clientele, but we are hoping to attract some of those mindless yuppies to spend their big wads of money here at Gym's instead of at new places like that raw fish and yogurt beauty parlor," Mr. Dunkelbauer explained to the Alameda Daily Noose and me. "We've added a lot of sweet coffee drinks with funny names to the menu, and we've started using words from various foreign languages instead of 'small,' 'medium,' and 'large.' We've turned down the lights and turned up the music, installed some extra flat-screen T.V.'s, and we've started serving dishes with reductions and compotes and demi-glace, whatever those are. And of course, we've jacked up the prices on everything. We think it's going to be a huge hit!"