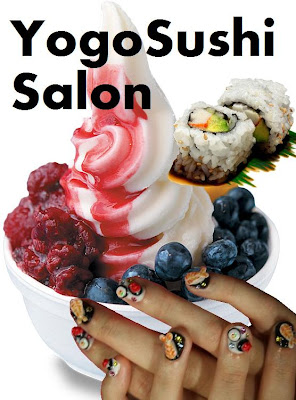 In response to high customer demand, the Drilspak Corporation has announced the imminent opening of Alameda's first-ever one-stop spot for all of our residents' Frozen Yogurt, Japanese food, and nail-care needs.

The shop, to be called YogoSushi Salon, will take over the now-defunct Starbucks location at the corner of Park Street and Central Avenue.

Alamedans interviewed by the Alameda Daily Noose and me were ecstatic about the idea. "I've always gotten hungry while I'm getting my daily manicure," said Gold Coast resident Jeanne Kimballa. "Now I can eat some cheesecake-flavored yogurt with blueberry toppings with my right hand while the nails on my left hand get trimmed, buffed, and polished."

West-Ender Dave Krill was similarly enlivened. "I've always wanted to treat myself to a pedicure—what man wouldn't—but I've never had the time during my lunch hour. Now I can relax with a some of my favorite nigiri pieces while getting my feet pampered."

YogoSushi even has something for the kids. Mr. Krill continued: "My kids aren't interested in getting their nails done, but they love yogurt and sushi! And I'll bet they'll jump at the chance to put some of those mini California rolls onto their yogurt as a topping!"

The Alameda Daily Noose and I are looking forward to the opening of YogoSushi Salon. The establishment is expected to open in mid-August, pending a review from the Alameda County Health Department.