The Real Problem Is Rambling Letters, Not Grumpy Ones 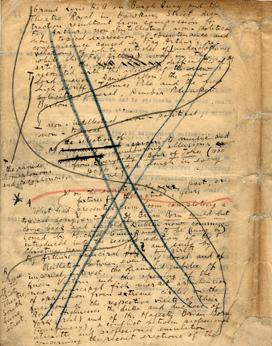 I read Ned Sneering's letter from a fortnight or so ago with partial agreement. But what Mr. Sneering failed to realize is that his letter itself was an example of the real problem with letters to the Editor these days. It's not grumpy letters that are the problem, it's rambling!

Right-Thinking Alamedans have had to deal with rambling for years now. Not just in letters to the Editor, but in all walks of life. Just yesterday, for instance, I received a phone call from some political group dedicated to saving our cats and dogs, and all the person could do was just read from this long script talking about the plight of homeless kittens and puppies, while I waited for an opportunity to interrupt her and tell her that I just was too busy to talk on the phone. My casserole was almost ready to come out of the oven, Jeopardy was just about to return from a commercial break, and there were some noisy teenagers riding their skateboards across the street that I really wanted to glare at. Fortunately I was finally able to convince this well-meaning but ultimately misguided "tele-marketer" that I didn't want to hear her speak anymore, just in the nick of time to hear the "answer in the form of a question" from three-time champion Richard Whilling, of someplace called Montana or Montania. (Sorry, I didn't catch the city's name exactly. In any case, I was very impressed with his knowledge of 16th Century Industrial Revolution-Era Millinery.)

The teenagers, alas, had long departed, but I think I know what house they live in. I have my eye on you, teenie-boppers! Come riding by my part of the block and I'll have your number!

I hope I'm driving my point home here, because a letter to the Editor needs to get to the point quickly and without delay. Most importantly, a letter needs to be short. Ladies and gentlemen, if you are writing a letter to the Editor, make sure to edit, edit, edit your letter down to the bare essentials. Your sentences should be short and to the point, only containing a single relative clause. Never use a big word when you can use a diminutive one. And pay attention to the needs of your Right-Thinking readership. After all, by writing a letter to the Editor, you are writing an editorial. You are effectively sharing your thoughts with the world. It's an ominous concept, that you have, for a moment, the undivided attention of all Right-Thinking Alamedans. Nobody is more deserving of your best efforts than Right-Thinking Alamedans, so make sure your words are well-crafted and tuned to their needs. Above all, be sure that you are not being redundant! For example, it is imperative that your letter be absolutely pared, honed, and sharpened. Whittle your letter down to the absolutely bare necessities to get your point across; consider that many writers these days (and even in days long gone) just drone on and on with long, long sentences that continue on as if they were in some sort of James Joyce or Ernest Hemingway novel, for example Ulysses by James Joyce has a section with just two sentences: one that is 11,281 words long and one that is 12,931 words long (Did you realize that? It came up on Jeopardy tonight also). Keep in mind that having a sentence of this length would not only bore your readership but also — I'm not quite sure how — possibly be too long for the Internet to handle. I have a friend whose grandson is very much into computers, especially computer systems I've never even heard of — that's how smart he is — so he would know for sure. He is always telling her about his computers with strange names. One is called the "Why" or the "Whee" or some such, but It's spelled so oddly. Young people with their newfangled words. I'll never understand how the language can change so much as we Elden.

In conclusion, I cannot stress how important it is that your letter be easy to read for people with poor eyesight! Although I love the yellow color of the Alameda Daily Noose as it flickers across the "Web TV" that the aforementioned grandson installed so many years ago when you first started publication, I find that my eyes have become wantsome in their ability to distinguish contrasting colors. When you write your letter to the Editor, my advice to budding journalists is to use short sentences, and even shorter paragraphs. That will help guide the viewer's eyes to the important parts of the letter.

I do hope to write another letter next week if I can think of another topic. Before I go, I should mention that I believe that the Alameda Daily Noose is both the "Bee's Knees" and the "Cat's Pajamas." Both of these terms were invented in the 1920's "flapper" era that I remember so fondly. This is a modicum of trivia that was revealed in tonight's round of Final Jeopardy (shortly after the Millinery topic I mentioned a fleeting moment ago).