Concerned Alamedans: "What Are You Trying to Hide, Mayor Johnson?"

As you know, a group of concerned Alamedans has been investigating claims that Beverly Johnson is not eligible to be mayor of Alameda because she is not "a natural born citizen" of our fair Island. We believe that Johnson has been concealing the fact that she was actually born in Oakland. Whether her parents were Alameda citizens at the time is irrelevant—she was born across the estuary, which means she is not legally suited to govern our Fair Isle according to the City Charter!

Due to our pressure, Johnson finally issued her birth certificate, as well as an "It's A Girl!" announcement that appeared in the Alameda Puppy Trainer on Oct. 3, 1958. However, anyone looking at the attached "document" can see that it is a cheap forgery! 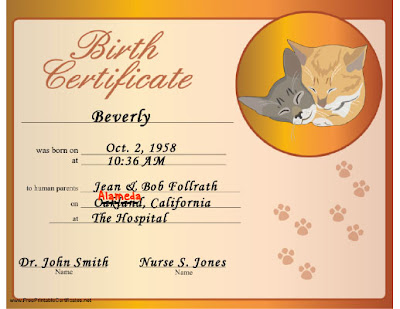 What are you trying to hide, Mayor Johnson? It would be so easy to clear up this confusion—just show us your REAL long form birth certificate! If left festering and unanswered, this situation possesses the potential to send our city into a time of great peril, and our group will have no choice but to file suit to challenge each and every one of Johnson's actions as mayor.

This can't be true because the puppy trainer started publishing in 2001.

Aha! If the Alameda Puppy Trainer didn't start until 2001, that means that Mayor Johnson can't be more than eight years old, which means that she is too young to be legally the mayor.