Soon it will be time to celebrate the historic declaration of our nation's independence from that dark liquid to which its entire population had become hopelessly addicted, namely, British tea. Since nothing says "independence" quite like blowing things up, I hopped into my hybrid S.U.V. and began my annual trek to the fireworks stand. On the long drive, I started thinking about the environmental impact of the large purchase I was about to make: Just how green is our fireworks display? I resolved then and there to make this our greenest Independence Day ever!

Upon arrival at the stand, I started browsing for kinder, gentler fireworks. I skipped right past the snakes and sparklers, of course, because everybody knows those are lame. After some searching, I finally found something that looked promising: 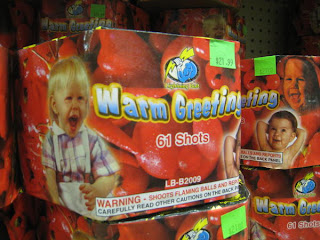 What could be more innocent than a "warm greeting" from an adorable baby nestled in what looks like a box of fresh, delicious organic produce? However, upon closer inspection, I discovered that this adorable baby apparently "shoots flaming balls." I wasn't sure, but I thought something like that might involve chemicals, which we all know are bad for the environment.

It took me a while to get the attention of the proprietor of the fireworks stand—he was hard of hearing, and he really had to concentrate on working that cash register with his remaining fingers—but once I did, he dropped a bombshell on our plans: Apparently, all of the fireworks in his stand are made with chemicals! Greening our Independence Day was going to be tougher than I thought.

Devastated, I climbed back into the S.U.V. and hit the road. As I zipped along in the hybrid-and-carpool-only lane, the newly widened freeway that leads to our house sliced through a grove of evergreen trees, and the idea finally hit me: 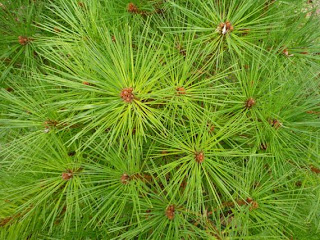 Who needs a fancy, chemical-laden fireworks display when a simple evergreen bough contains just as much fun and beauty? I cut across traffic, drove off into the ditch (that four-wheel drive comes in so handy!), got out my trusty chainsaw, and cut down the biggest tree that would fit on my roof rack.

I know what you're thinking: Is cutting down an evergreen tree really a good substitute for fireworks? You're right, those needles can be very sharp, and may not be suitable for young children. If your family is not quite as adventurous as mine, I suggest substituting a head of organic lettuce for the evergreen bough: 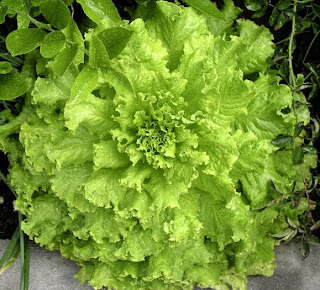 The lettuce provides an explosion of greenery that is almost as thrilling as the evergreen, but with soft, leafy edges instead of dangerous needles. Unlike the tree, which goes straight into the wood chipper, the lettuce can even be re-purposed as a delicious post-fireworks salad…because if there's one thing children like more than safe fireworks substitutes, it's salad! I liked the idea so much that I made an extra trip to that hippie grocery store to pick some up.

I'm so excited about tomorrow, but please, if you see my husband and children, don't tell them about my alternative plans for our family fireworks display. I know the green surprises I have in store are going to knock their socks off, and I'm sure the children in particular will be speechless, crying big tears of joy over all the good they'll be doing for the planet!

Oh, my Chinese compadre is so right! Especially when he said 情趣 … and when he said 如何 I just about fell on the floor … what a great joke about James Joyce! But in all seriousness, I'd like to close out with a quotation from the great Lao Chang: