Now, personally, I never read any of those so-called newspapers, preferring the balanced coverage of the Alameda Daily Noose, but someone recently forced this appalling clipping into my hand. When I saw what horrors it contained, I felt compelled to send it on to you: 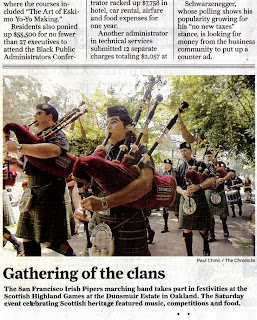 Yes, now there are Irish Bagpipers. Things were bad enough when it was just Scotsmen who were wandering around, menacing the populace with ear-destroying Bagpipes, but now it has become apparent that Bagpiping is contagious. My guess is that the disease of Bagpiping is spread through the air, and possibly also through contact with Tartan. If the Irish have already caught the bug, can the innocent citizens of our own precious island be safe? Lest anyone question the severity of this threat, let me point out that the Bagpipes have clearly already completely clogged the streets of those other nearby cities that are not Alameda. Any fool can see that the density of Bagpipes in those cities has brought with it many other urban ills, including cable cars, Children's Fairy Land, and the excessive tree growth evident in the photo.

If Alameda wishes to avoid a similar fate, we must inoculate our city against Bagpipes. Many of us moved to Alameda because it was a nice, quiet town without a lot of Bagpipe traffic, and we want to keep it that way. Besides, Alameda already has a higher Bagpiper density than any other city in the Bay Area, so it's obvious that we can't allow even one more Pipe band to locate here. Right-Thinking Alamedans must act now to halt the spread of Bagpipes, preferably while wearing protective respirators and earplugs.