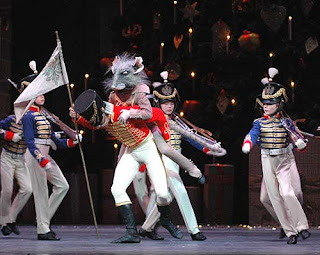 The Alameda Daily Noose and I were excited to learn that on Saturday, December 19th, and Sunday, December 20th, the Alameda Civic Ballet (ABC) will be performing The Nutcracker. As we understand it, this ballet is a stinging indictment of Squirrel activities, featuring a hero who fearlessly confronts the King of the Squirrels and destroys his entire stash of winter provisions by masticating them.
Attending The Nutcracker should be a great activity for children, but ABC doesn't stop there. They are also conducting a campaign to encourage children to consume ice-cream instead of alcohol, and are conducting covert operations to prevent anyone from slipping alcohol into Alameda's ice-cream supply. It's easy to imagine what kind of subversive element might resort to such sabotage, but since not all of our readers are imaginative at all, we'll spell it out for you: S-Q-U-I-R-R-E-L-S! We're lucky that highly trained ballerinas are standing ready to knock some sciurine heads together, probably with dazzlingly coordinated and deceptively powerful taps of their pointe shoes.