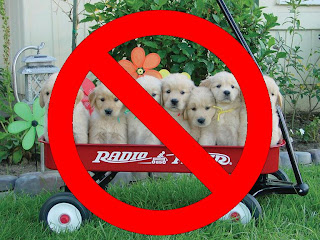 I heard that somebody read somewhere that there was a car crash recently that was caused by a puppy distracting the driver. Today's drivers have so many things to concentrate on, like sending text messages while eating a breakfast burrito (those are so good!) and putting on makeup, that even the slightest distraction could cause an accident. I've said before that this town is too soft on puppies, but did anyone listen?

Now that we know that it's puppies that are causing all those car crashes, the only solution is to ban puppies. After all, the driver crashed into a day care center, and even though none of the children were hurt, it doesn't take a genius to see that allowing puppies near children is just an accident waiting to happen.

And to think that our mayor has actually issued a proclamation in favor of puppies and kittens! Is the blood of a child what it will take for people to figure out that we have to get Alameda's puppy problem under control? Dogs are okay, as long as you're not allergic, but it's clear that we need to have a zero tolerance policy for puppies. They should never get the chance to set a paw on Alamedan soil.