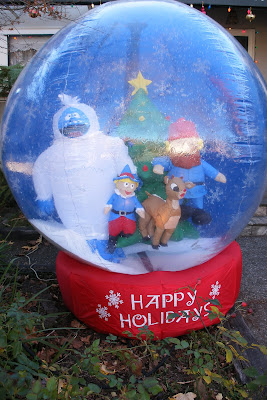 By all accounts coming into our Inaction Alameda news desk, our City leaders and the senior officials at the Alameda Fire Department were, and are ill-equipped to properly respond to reports of toxic contamination, such as the one phoned in by the concerned resident who snapped the photo you see here.

Alarmed at a situation unfolding in a neighbor's yard, a terrified resident called the Alameda Fire Department at 7:42 a.m. yesterday to report a veritable blizzard of suspicious white particles swirling around a helpless man, his child and some kind of animal—possibly the family dog—who stood there in their festive holiday garb, frozen, paralyzed with fear. Behind them loomed a figure clad in a white outfit, clearly one of those "hazmat" suit designed for handling hazardous materials, wearing blue plastic gloves and a blue mask, probably a respirator of some kind.

In a press release, and FAQ posted to the City of Alameda website, the City is downplaying the risk to residents from these mysterious white particles, claiming that they are not only "harmless" but also "contained" and therefore "do not pose a health risk."

But what about the person in the hazmat suit? Is he wearing it for fun? And how do they know that the particles are harmless and do not pose a risk? If so, why is that poor animal's nose so severely inflamed, in an obvious sign of respiratory distress?

The City failed to act—they didn't take air samples downwind of the neighbor's lawn, and they didn’t issue a shelter-in-place warning to residents, and they didn't use the emergency notification system to call residents, just because "there was no, repeat, no actual danger at any time." Are they saying that residents aren't smart enough to judge the danger for themselves? Oh, no, the eggheads in the ivory tower, the so-called experts, will decide what's dangerous and what isn't, so you common folks don't worry your pretty little heads about it! How disgustingly patronizing and insulting.

The chief purpose of municipal government is to protect citizens from every danger, real or imagined, and deliver whatever services to them that they desire, but without ever raising taxes, of course. This is only the latest example of how the City of Alameda is failing on all counts.