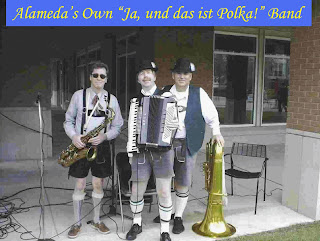 The Alameda Cultural Heritage Education Society had a rip-roaring time last night at their annual fund-raiser. Society members mingled to the accompaniment of those local polka wizards, the "Ja, und das ist Polka!" band. As always, there was plenty of free parking.

Some attendees also seemed to be attempting to waltz to the music, but were hindered by the tables heaped with festive homemade foods and beverages, including a tasty new surprise from Former City Council Candidate, featuring an Alameda-raised delicacy smothered in delicious melted cheese. You must try them!

Plaques were awarded to the members who had donated the most money to preserving Alameda’s Cultural Heritage during the past year, with special recognition going to Society president Janice Lighter-Merv for her tireless attendance at Society events.

According to Society records, nearly five tickets for the fundraiser were purchased by citizens who are not on the A.C.H.E.S. board, resulting in a 100% increase in outside ticket revenues over last year. This means that only 28% of the funds spent to hold the fundraiser were not replaced by proceeds from the fundraiser: a new record for the Society!

The A.C.H.E.S. will hold another fund-raiser next year, on June 22nd, at the usual time and place. If you don’t know when and where that is, you must not be from around here.