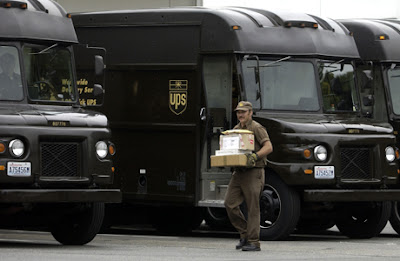 Yesterday, I snapped this picture of UPS trucks in my neighborhood. As you can clearly see, there are not one, not two, but three of these trucks parked right next to each other, in a flagrant, broad-daylight violation of the Brown Act. I'm just glad The Children were not around to witness this scene.

The Brown Act was passed in 1953, in response to public outcry over an army of transient courier delivery trucks traversing the entire length of small towns each day at rush hour, contributing nothing to those cities except congestion and pollution. The Brown Act forbids three or more UPS trucks from meeting without first posting an agenda and notifying the public, and it requires that each UPS driver begin by taking public comment from all citizens in attendance before delivering any packages.

Needless to say, I never received anything in the mail about the meeting of three UPS trucks in my neighbhorhood, nor did I see a word about it in the Alameda Daily Noose or any of the other major news media. When I blocked the advance of the driver in the photo above, waving my speaker slip and demanding my three minutes of public comment, the look in his eyes was a clear invitation to stick my little slip somewhere I can't describe in a family noosepaper.

Any and all violations of the Brown Act must be taken seriously. I think our city leaders, City Manager and Council, need to call a meeting with UPS officials to discuss and discourage this. When UPS refuses to listen to us right-thinking Alamedans, we must immediately begin drawing up plans for Alameda to run its own package delivery service. All UPS truck access can then be blocked off by installing protective barricades and extensive security checkpoints at each tunnel and bridge. That will teach them to needlessly slow down traffic in our town!

You've won a one year free membership to Unaction Alameda for your insightful post.

One other question; when the UPS or Fed Ex makes deliveries on the island who is accepting material and products from off the island? I think the city council should begin looking into this intrusion of our Alameda way of life. What's next; people from off the island coming to Alameda to shop and eat. Heavens to betsy, this must be stopped.

Thank you, NFD, for your kind words. It's so great to see other right-thinking Alamedans getting involved in these momentous issues that shape our times.

You certainly have the right idea: Why bother going to all the trouble of confirming that something is true if you already FEEL that it's true? I mean, rather than following vehicles all the way to their destinations, isn't it much more efficient to just go with your gut feeling about where they must be headed? This would leave a lot more time for the things that really matter in life, like writing outraged letters to award winning daily newspapers.

Just think how much money the city could save if it applied this simple technique to every aspect of government. No more costly quote-unquote research done by so-called experts, no Siree...just stop a right-thinking Alamedan at random on the street and you'll have your answer in a flash!

I closing, I must say that I, too, am outraged by reports that out-of-town vehicles are actually using California State Routes 260 and 61 to travel through Our Fair City. What unmitigated gall! Never mind the fact that Alamedans sometimes use Interstates 580, 880 and 980 to travel though Oakland at rush hour, even when they have nothing to contribute to that city except congestion and pollution; that's totally different because ALAMEDA IS NOT OAKLAND. I rest my case.

Wettervorhersage is a set of all the phenomena occurring in a given atmosphere at a given time. Most weather phenomena occur in the troposphere, just below the stratosphere. weather stickers refers, generally, to day-to-day temperature and precipitation activity, whereas climate is the term for the average atmospheric conditions over longer periods of time. When used without qualification, "weather" is understood to be the weather of Earth.

A bank is a financial institution that accepts deposits and channels those deposits into lending activities. Bank primarily provide financial services to customers while enriching investors. Government restrictions on financial activities by banks vary over time and location. Banks are important players in financial markets and offer services such as investment funds and loans. In some countries such as Germany, banks have historically owned major stakes in industrial corporations while in other countries such as the United States bank are prohibited from owning non-financial companies. In Japan, banks are usually the nexus of a cross-share holding entity known as the keiretsu. In France, bancassurance is prevalent, as most banks offer insurance services (and now real estate services) to their clients.