"Measure Acorn" Rivals to Face Off in Squirrel Cage Smackdown 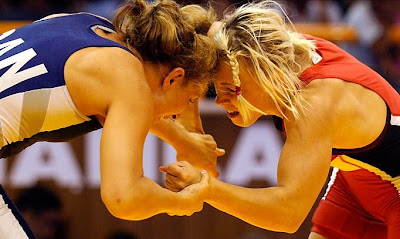 Wednesday! Wednesday! Wednesday! July 11, at 7:00 p.m. in the old gymnasium at Alameda Hospital, the City of Alameda Democratic Wrestling Federation (C.A.D.W.F.) will present a no-holds-barred steel cage match that is being internationally promoted as the "Fray by the Bay." Frustrated with years of so-called community meetings and quote-unquote public forums that have decided nothing, the C.A.D.W.F. plans to settle the long-running debate over Alameda's Squirrel-limiting "Measure Acorn" the American way: with good old-fashioned, red-blooded violence.
Proudly representing the views of right-thinking Alamedans everywhere will be former councilmember Brenda Karl, who is fiercely independent and is not, repeat, not wrestling on behalf of the community group "Save Quiet, Unspoiled Islands from Rapacious Rodent Evildoing Limb-Hoppers Attacking, Terrorizing, and Endangering Residents: Squirrels!" (S.Q.U.I.R.R.E.L.-H.A.T.E.R.S.!). Karl will face off against the reviled Squirrel-hugger Elaine Hollandaise, founding member and co-chair of "Delightful Acrobatic Rodents Living In Neighborhood Greenery" (D.A.R.L.I.N.G.), paid shill of Big Arborist, and all-around nasty person. The outcome of the match will determine whether "Measure Acorn" is upheld or rejected, thanks to a little-known provision in the City Charter that has not been invoked since 1894, when Thurston Wainwright defeated Fergus Avery in a thrilling match that upheld Alameda's Tartan-limiting "Measure Angus," which had been enacted just one year earlier.
Tickets will go on sale today, Friday, July 5 at 10:00 a.m. at the C.A.D.W.F. box office and ticketmaster.com. Ticket prices are $15 for the bleachers, $20 for floor seats, $25 for ringside seating, and special V.I.P. passes for $50. Bell time is 7:00 p.m. and the doors open at 6:30 p.m. Parents who see this be warned, this match is going to be violent and bloody and may contain foul language, twisted logic, and explicit discussion of Squirrels.

Ha Ha! Measure Acorn... Love it. I myself personally hate Measure A and would love to see a good ole' fashioned debate over it. It will be interesting.