Can Alameda's Mexican Food Be Spicy? The Answer May Surprise You! 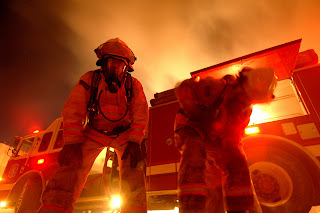 Yesterday evening, fire crews responded to a major incident at one of Alameda's most popular Mexican eateries. By the time the Alameda Daily Noose and I arrived, the situation appeared to be under control. Fire vehicles, firefighters and equipment from Oakland responded to the scene, joining numerous Alameda firefighters, fire trucks and other equipment already responding.
The incident began when right-thinking Alamedan John Blanding ordered what the menu described as a "'spicy' three-cheese burrito." Upon popping said "burrito" into his mouth, Mr. Blanding immediately felt an intense burning sensation he had never before experienced in Alameda. He cried out, "My God, when it said 'spicy' I thought it meant Alameda spicy! It feels like my mouth is on . . . FIRE! FIRE! FIRE!" Panicked patrons stampeded out of the restaurant, and a quick-thinking staff member sounded the alarm and activated the building's emergency sprinkler system.
Mr. Blanding was rushed to the recently opened Capsicum Trauma Center at Alameda Hospital, where a quick application of milk and sour cream saved the man's life. The extent of damage to the restaurant was not available at the time of publishing this story in Alameda Daily Noose.
Sadly, this incident could easily have been prevented. All restaurants in Alameda are supposed to be inspected regularly to ensure that no traces of chilies or other exotic spices ever accidentally find their way into the food. Alameda candlestick maker Pat "the General" Mills was an observer at the scene and commented: "This was an accident waiting to happen. I've been writing grumpy letters to the editor for years about the lax enforcement of Alameda's spice control ordinances. It's a wonder some right-thinking Alamadean's tongue hasn't gone up in flames before today."
The Alameda Daily Noose and I would like to remind our readers to check carefully for a posted up-to-date certificate from the Alameda Department of Spice Control before eating in any local restaurant. The tongue you save may be your own!