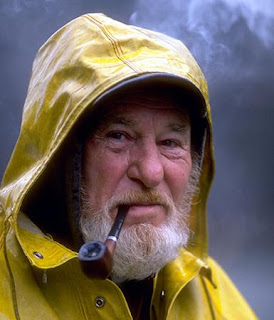 Photograph of Captain Everett Street when he was 23 years old, in the prime of his seafaring days.

The Alameda Daily Noose and I would like to wish Captain Everett Street a very happy 81st birthday. Captain Street, lovingly known as "Cap'n Everett" to his friends, comes from a long line of hardy seafaring Alamedans whose nautical skills were matched only by their prowess at writing grumpy letters to the editor, delivered by carrier pigeon. Even the most ignorant, insensitive, uppity newcomer to Alameda—and you know who you are!—has probably noticed that nearly half of the thoroughfares in Our Fair City are named after famous members of Cap'n Everett's family.

Cap'n Everett sailed the seven seas until a severe case of writer's cramp finally forced him to retire in 1973. Determined to stay active, Cap'n Everett went on to open the Rusty Scupper Family Seafood Restaurant on the Alameda Riviera. The restaurant is now firmly established as one of Alameda's most beloved institutions. In addition to serving the most freshly thawed seafood in town, Cap'n Everett's Rusty Scupper also hosts concerts by Alameda's own Ja, und das ist Polka! band every Saturday night, featuring all-you-can-eat Fischer-Schnitzel and, as always, plenty of free parking.