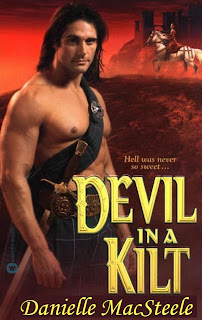 Alameda author Danielle MacSteele has written yet another book, Devil in a Kilt, a historical romance novel taking us back to Alameda during the century before last. It is the story of three college friends and their families, well educated, well to do, and loyal to the City Council. Delighted, they see conservative Heinrich Weichhart win the mayoral election. But within months, the reins of government tighten. Weichhart's new vice-mayor, Angus Horsburgh, asserts more power daily. Blinded by his promises in their hour of need, the people rejoice; little do they know that he will lead them into tyranny and doom.
Why did the people fall under his spell and worship him? The author gives compelling answers by reaching behind the mystique that shrouded Horsburgh's persona, the man who called himself the Kilted Savior sent by God. Her characters struggle between Right Thinking and the temptation of Tartan and Bagpipes.
Alameda is at a crossroads: a city of splendor amidst the abject poverty of new Scottish immigrants; Horsburgh as choirboy, his stormy love affair with a niece half his age whose obsession with Squirrels caused many rumors. It is the story of people coping with adversity, of their fear of informers lurking everywhere, of human ingenuity to make do and survive when everything is lost and nothing can be bought. It is the account of a people saved by Alameda's Tartan-limiting "Measure Angus" that helped them, and their Treasured Island, back to their feet in 1893.
All in all, it is an inspiring chronicle of the resilience of the Alamedan spirit. The author is a seventh-generation Alamedan, which makes her books at least seven times better. Her family's experiences and those of their friends give a panoramic view of all aspects of life during that tempestuous time. In 1998, she published her first book, A Whiff of Whiskey. Ms. MacSteele's subsequent works included Love Among the Walnuts, Sporran in the Grass, Squirrel o' My Dreams, Wuthering Haggis, and Love's Caber's Toss'd. Her previous book, 2004's critically acclaimed Clash of the Tartans, recently received Alameda's highest literary honor: having a copy donated to the library by the community group Unaction Alameda. (The Alameda Daily Noose and I kindly ask our readers not to inform Miss MacSteele that the library already had a copy; she would undoubtedly be devastated.)