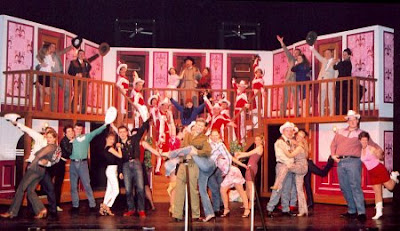 As the leader of a group of concerned Alamedans who live on or near Central Avenue, I wish to announce that we have launched a petition drive asking the City Council to act immediately to shut down the house of ill repute that opened to great fanfare on Saturday at 2200 Central Avenue. I have attached what appears to be an artist's rendering of the project, submitted to the Planning Board during the approval process. My computer-whiz friends tell me you can click double on the following dingus to see all the details of this horrible plan:

According to my sources, which are never wrong about these things, an Evil Developer from out of town...somewhere in Texas, I believe it was...came in and managed to rush the whole thing through the permit and approval process with a lot of song and dance about how the brothel was somehow "a valuable and entertaining addition to Alameda's cultural scene," on par with great civic institutions like the ballet...no, I think he said it was more like an opera, only lighter. Apparently he even suggested...without so much as a blush, mind you...that the general public might welcome and enjoy open, explicit displays of thespianism! WELL, maybe that's SOME people's idea of "culture," perhaps in some liberal hell-hole like Amsterdam or San Francisco, but certainly not in OUR neighborhood!

Maybe folks don't really love their kids in Texas, but here in Alameda we value The Children and we won't stand idly by while they're exposed to allude and loquacious behavior. We're also concerned that the ruckus from the bordello will keep folks in our neighborhood up at all hours. Worst of all, we are concerned that the proposal did not include nearly enough off-street parking spaces, and we fear that the so-called "Johns" will be constantly parking RIGHT IN FRONT OF OUR HOUSES!

We concerned Alamedans want to know: WHY was all the planning done in secret? WHY didn't anyone knock on our door, sit down with us on the couch, offer us a cold beer, explain all of this to us, ask us for our opinions, and patiently listen and take notes as we gave him an earful? HOW much tar and feathers will it take to cover the entire Planning Board and City Council?

I'm sure that the Evil Developer from Texas told the Planning Board that this project was the "best" for Alameda and would have "little" impact. Well, we concerned Alamedans feel that this whole ridiculous production will turn out to be the "worst, big whorehouse from Texas" that this town has ever seen!

As one of the right thinking people in Alameda, I'm appalled at any event that promotes open, explicit displays of thespianism.

What people do in their own homes behind closed doors is their business, as long as we approve. I believe the Measure A sub-committee should look in to this very important matter. I'm sure they could move quickly and decisively on this subject as they have on the Measure A question.

We need to nip this in the bud. We right thinking Alamedans can't take the chance our children will be influenced by a bunch of flaming thespians. If we want to keep Alameda just the way it was in 1959, we'll have to stop the thespians now.

There weren't any thespians around this town when I was growing up. Maybe I'm just too old to change my thinking, but I can't understand why anyone would choose to live that way.