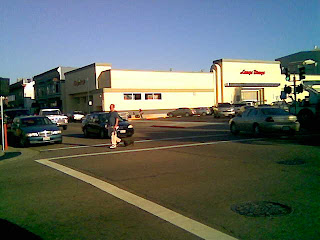 Last night, the Alameda Planning Board made yet another huge mistake. After three hours of discussion, the Board voted on what they thought was a proposal to build a windowless building to house the Longs Drug Store in. Unfortunately, as the photo above from our intrepid photographer shows, Longs managed to sneak three small windows into the building facing the parking lot.

The Planning Board President said that the board "had thought the language was strong enough to make sure there were absolutely no windows in the building. Sadly, Longs found a loop-hole, known as the Payne exception, and managed to squeak a few in." After further discussion, the Planning Board President pointed out that all was not lost, "At least the Santa Clara side of the Building which faces the street and sidewalk has no windows at eye level, so passers-by will see only a nicely painted wall."

Hello I'm new. Great forum. Just found it on Google. Thank you 4 the Awesome community we have here :)

Hey I'm new. Brilliant forum. Just found it on Yahoo. Thank you 4 the Great community we have here :)

gonna check for the [url=http://atomtv.info/]latest trends[/url] now, hope it's not Justin Bieber again :\