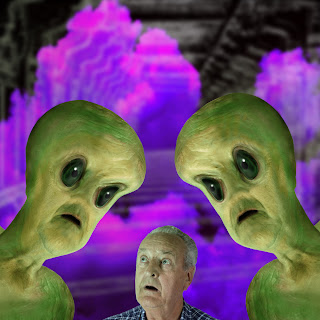 At a packed-to-capacity meeting last night, the City of Alameda Public Works Department, in conjunction with the California State Coastal Conservancy, finally provided a panicked public an opportunity to learn about proposed actions and developing plans to control invasive alien infestations of our Treasured Island.
The spread of the non-native alien invaders in our lush island habitats has been a topic of concern in the San Francisco Bay region since the early 1970's. The Conservancy has identified infestations of species of little green aliens known to us only as "Spartina" in areas of prime real estate throughout the Bay Area, including Alameda. Most disturbingly of all, these ruthless interlopers have taken nearly total control of locations that are well-known as favorite gathering places for The Children.
The City has formed an alliance with the State Coastal Conservancy and the East Bay Regional Park District to provide significant, timely control and eradication of the invasive Spartina. 2007 marks the first year that invasive Spartina control efforts will occur along the northern shoreline of Alameda. Our Mayor, speaking from the steps of City Hall, assured a hastily assembled audience, "We shall defend our Treasured Island, whatever the cost may be, we shall fight on the beaches, we shall fight on the Alameda Landing grounds, we shall fight in the soccer fields and in the streets, we shall fight on Mount Trashmore; we shall never surrender!"
Control of the spread of the non-native Spartina would serve to minimize the potential for Spartina-caused disasters, encroachment into soft, susceptible areas quite possibly inhabited by The Children, and impacts to the God-given habitat of local, native, right-thinking Alamedans.
The purpose of this public review of the proposed Spartina defense force and battle alliance efforts is to provide the public an opportunity to learn about proposed military actions to control this invasive alien menace. More information can be found at http://www.spartina.orq.