Acting on a tip from a concerned Alamedan, the Alameda Daily Noose's crack team of investigative journalists has obtained (through methods that most certainly did not, repeat, did not involve donning a black cat burglar outfit and playing the soundtrack from "The Pink Panther") a copy of a secret report being prepared in secret by John Knox White's Commission. This report, entitled "A System to Increase Traffic and Congestion," features a chapter called "Grand Street Master Plan" that confirms all of the worst fears of the concerned Alamedans who live on that threatened patch of our Treasured Island. 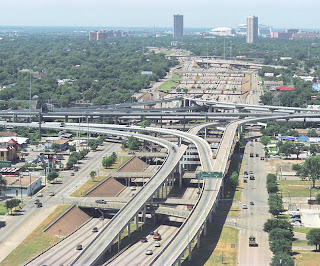 This artist's rendering, taken directly from John Knox White's Commission's report, shows the view from above Grand St. looking south. In the middle is the intersection with the newly re-engineered Santa Clara Ave. The high-density housing towers slated to rise on extensive new landfill south of Shoreline Dr. are visible in the distance.

Today, during the huge parade being held for the Alameda Daily Noose and me, a group of concerned Alamedans who live on or near Grand Street will launch a petition drive asking the City Council not to approve John Knox White's Commission's System to Increase Traffic and Congestion. We encourage all right-thinking Alamedans in attendance to sign the petition, right after they finish throwing their bouquets to the Alameda Daily Noose and me.

While I applaud the Noose for their investigative powers. I'm surprised you didn't publish the updated picture of Santa Clara and Grand. The updated picture clearly shows the east/west and north south BART extensions that will run through our pristine little hamlet if the fruits and nuts on JKW's Commission are allowed to run rough shod over Alameda.

As any right thinking Alamedan knows; traffic is fine, public transportation meets the needs of those poor people that need it, and this being Alameda, there is no reason to consider other options to problems that don't exist. And as all right thinking Alamedans know, our fearless leader has told us so, there are no real problems in Alameda. Just a bunch of Commie, socialist, wackos who are trying to spoil our special way of life. Your should all go back to where you came from and leave Alameda to us right thinking Alamedans.