Palin Takes Fight to the Squirrels and Their Allies 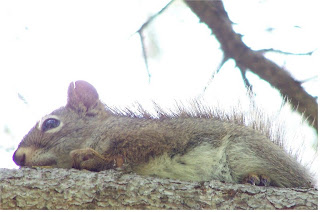 Until just a few days ago, the Alameda Daily Noose and I had been in despair over the state of the presidential race. First brave anti-Squirrel crusader Mike Huckleberry was forced to drop out, then came disturbing revelations about John McCain's clandestine ties to Squirrels, and finally Barack Obama was exposed as a kilt-clad Secret Scotsman. Well, all of that changed with McCain's shocking announcement that Sarah Palin, the bible-thumping, gun-toting hockey mom featured in that well-researched Alaskan documentary series "Northern Exposure," will be his running mate.

According to some worthless rag called the Chicago Tribune, Miss Palin is not only taking the fight to the Squirrels, but also the Squirrel-hugging liberal media:

Expect Palin to knock squirrels out of trees across Ohio and Pennsylvania, along with other critters, fur and feathered. Unlike other candidates, she'll probably do her own shooting and skinning, and maybe roast them on sticks, with a pinch of salt, demanding reporters eat some, so they can say it tastes like chicken.

The Alameda Daily Noose and I had been holding out hope of writing in Heidi Wilson for president, but with Palin on the ticket we can finally put aside our reservations about John McCain and vote Republican with a clear conscience. We may not agree with McCain on any of the issues, and we may still believe that he is Soft on Squirrels; however, when we think of Miss Palin drawing a bead on a scurrilous Squirrel, nothing else seems to matter. Almost as exciting, Miss Palin's name will actually be on the presidential ballot! And how can any Right-Thinking Alamedan resist the political allure of roasted Squirrel on a stick?

So watch out, Squirrels and shameless Squirrel-loving "news" media! Well might the hairs on your flea-bitten pelts stand on end. Once this election is over, and Sarah Palin and her running mate, what's-his-name, have been swept to victory, your days will indeed be numbered.