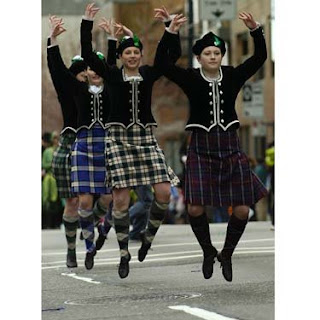 The Alameda Daily Noose and I have learned that the West Alameda Business District intends to create some kind of huge "jam" this weekend, by which we can only assume they mean "traffic jam." We uncovered this dastardly plot by scouring their interweb site for subtle clues like press releases. It seems that they are going to cause the jam by reducing the number of traffic lanes on Webster Street. They then expect the extra space to be filled—in a flagrant violation of Alameda's Tartan-limiting "Measure Angus"—with roving bands of Scottish dancers and other such "musical" menaces to our way of life in Alameda. Where will it end?

Of course, it's ridiculous to assume that just setting aside some street space is going to cause people to start dancing. That sort of thing might work in Manhattan, where traffic is so bad that people are forced to dance in order to get anywhere, but nobody dances in Alameda—we're an island! Those social engineers on Webster Street will soon find out what a failure their deliberate increase of traffic congestion is. And when that happens, it will be the duty of the Alameda Daily Noose and me to say, "We told you so!"