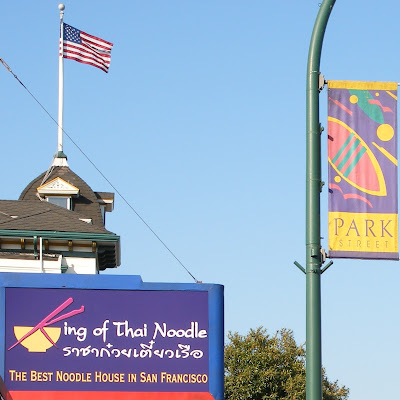 I was circling the block yesterday, waiting for that perfect parking space in front of Ole's Gruel and Hardtack Hovel to open up, all the while fuming about just how bad things have gotten in our pathetic excuses for business districts, when I encountered the most brazen thing I have seen since my days as a singing cocktail waitress in a Navy bar: a sign that reads, "King of Thai Noodle: THE BEST NOODLE HOUSE IN SAN FRANCISCO"!

For a second I thought maybe I had woken up in the wrong town that morning, but I rubbed my eyes and surely enough, there was a big banner nearby that said, "PARK STREET." Listen here, buster, you may have crowned yourself the King of Thai Noodle, but which is it: Alameda or San Francisco?!

Now, maybe this is supposed to be some kind of joke. I know that people like Beka Mackeggie may think that Alameda needs more humor, but Former City Council Candidate and Dave Williamson certainly have her number: "Bekka Mackeggie is a Moron." I mean, how can we trust someone who can't even decide how many k's are in her name? I know Dave Williamson would never get a thing like that wrong, because he is such a bright young man and his research is always so accurate.

However, I would be even more upset to learn that the sign is not a joke. That would mean that my greatest fear has come to pass: those outsiders who want to turn Alameda into San Francisco are starting to get their way! If Park Street is already part of San Francisco, how much longer until my house is also in San Francisco, with all of the dirt, crime, steep sidewalks and world-class art institutions that that entails? I don't want my neighborhood to be crawling with filthy artists!

Worriedly yours once more,
Marlene Verloren

"those outsiders who want to turn Alameda into San Francisco are starting to get their way! "


You should BE so lucky!
I live in SF and am unlucky enough
to work in the benighted, antediluvian backwater that is Alameda. I pray, every day, before my feet hit the ground that something, someone, ANYTHING will drag you Eisenhower refugees kicking and screaming into the 21st century. I'm not holding my breath though.

They didn't mean to offend us Alamedans. They are a chain of restaurants that got its start in San Francisco. I'm assuming they've received recognition for their food. Hence, the sign.