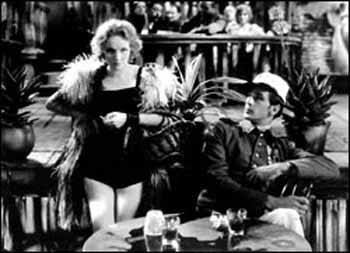 I know it's not really what her letter was about, but I'm so glad that Janice Lighter-Merv explained about the Alameda Secret Police. Now that I think about it, I'm sure I saw them back when I was working as a singing cocktail waitress at the Blue Angels bar, back when the Naval Air Station was going strong. Ah, how I miss those days! The fellas in the snappy uniforms -- and they weren't uniforms that I recognized from seeing all of those Navy boys -- I'm just sure they were those dashing Alameda Secret Policemen she wrote about. They were tough and they didn't tolerate any nonsense, no Siree, but they were always so polite to me and the other girls, and such good tippers! I think it's important to preserve that part of Alameda's culture and history, and especially the uniforms. Why don't more men wear uniforms these days?
Sincerely,
Marlene Verloren
Editor's Comments: Speaking of uniforms, the Alameda Daily Noose and I just can't get over how fantastic Miss Verloren looks in that photo. We wonder if she would be willing to donate that outfit to the Alameda Cultural Heritage Education Society in order to arouse the historical curiosity of the next generation of right-thinking Alamedans. We would be happy to make all the arrangements if she would just stop by Alameda Daily Noose World Headquarters some evening and drop it off.

Oh, Roger, you're not the first guy who's tried to separate me from my waitressing uniform, you know. You could have asked back when Cap'n Everett was off in the South Pacific, but no, you were too busy playing with your noosepaper. And now, what would be the point? Kids these days don't have any interest in the part their elders played in making history, and believe me, I've made some history in my time. I don't see much history in the future, though, so I might as well keep my uniform to myself, thank you. Don't feel bad, though. I know you men can't help but have your curiousity aroused by history. It's only natural.