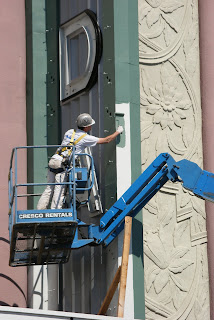 This Friday, in a shocking de facto admission of wrongdoing, the City of Alameda effectively issued a retraction of its John...Knox...Whitewashing of the so-called restoration of the Alameda Theatre in conjunction with the construction of the Super-Mega-Monster-Plex that Everyone Hates. No doubt in reaction to the hard-hitting investigative report published on September 11, 2007, by the Alameda Daily Noose and me, the City began a hasty cover-up of the John...Knox...White paint on the Alameda Theatre's big vertical sign with a guilt-ridden shade of green. Tch, tch, tch - pretty bad when the "City" can't even pick the correct hue in its "clarification" of the Theatre's color scheme! All right-thinking Alamedans know that the only acceptable pigmentation for any part of the historic Alameda Theatre is that noblest of all colors, yellow - or, perhaps, black. Shame!

I have read so many articles concerning the blogger lovers however this paragraph is
truly a fastidious post, keep it up.
My web page: drum tobacco review

When I originally commented I clicked the "Notify me when new comments are added" checkbox and now each
time a comment is added I get several e-mails with the
same comment. Is there any way you can remove people from that service?

Appreciate it!
Feel free to surf my website ... how to lose man boobs

Wow! This blog looks exactly like my old one! It's on a entirely different topic but it has pretty much the same layout and design. Great choice of colors!
Also visit my web blog : bostaditurkiet.net

My spouse and I absolutely love your blog and find nearly all of your post's to be exactly I'm looking for.
Does one offer guest writers to write content for you?

I wouldn't mind creating a post or elaborating on a lot of the subjects you write in relation to here. Again, awesome web log!
Also visit my homepage - asuntoturkista.net

Way cool! Some very valid points! I appreciate you penning this article and the rest of the website is
really good.
Look at my blog post ... under the skin

Greetings from Idaho! I'm bored at work so I decided to browse your website on my iphone during lunch break. I really like the information you present here and can't wait to
take a look when I get home. I'm shocked at how quick your blog loaded on my cell phone .. I'm not
even using WIFI, just 3G .. Anyhow, great blog!
my web page > http://www.electronicphonics.com/

Its not my first time to pay a visit this web site, i am browsing this
site dailly and obtain good data from here everyday.
Feel free to surf my site http://demo1.myworkdemos.com