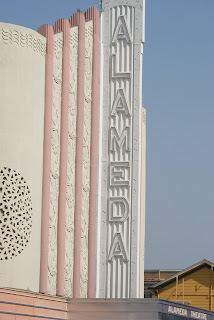 Recent, disturbing evidence confirms the Alameda Daily Noose's reports that subversive elements are ruining, rather than renovating, the historic Alameda Theatre. As if it wasn't bad enough watching the 600-story parking garage and Super-Mega-Monster-Plex That Everyone Hates grow out of the side of the old theater, now the lettering on the big vertical sign above the entrance is almost completely obscured. The "Alameda" sign has been uniformly painted a color that cannot be described as "Off-White," nor "Ivory," nor even "Clean Newsprint," but instead is unmistakably "John...Knox...White!"

The White influence, usually spread through propaganda pieces, is an even more powerful threat to our community than the influence of Perata, which was evident in the left-leaning pillars of the parking garage that we reported earlier. How many citizens have already forgotten that there ever was an Alameda Theatre, now that the letters of the sign blend into their background?

Everyone knows what a tragedy it is that those few people who patronize the Super-Mega-Monster-Plex That Everyone Hates will see little of the old theater as they are swept through the dimly-lit lobby with the throngs rushing for seats in front one of the countless new screens. The City is essentially John...Knox...Whitewashing this ugly truth. That is why the Alameda Daily Noose and I are here, spilling editorial ink all over the blatantly secretive injustice of the ruined sign.

Thank you, ADN, for exposing this White Supremisist, and for being a champion of the true color which we all must love and obey .... YELLOW!