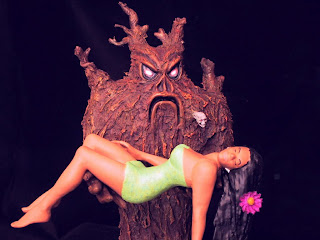 I just finished watching a documentary film that refutes all of the so-called arguments recently made by Blythe Ergot - if that is her real name - who obviously does not live in Alameda, because she clearly does not understand how unique Alameda is. This groundbreaking film, appropriately entitled "From Hell It Came," shows exactly where Alameda will be headed if tree-huggers like Blythe Ergot have their way: that's right, H-E-double-hockey-stick.

As this documentary clearly illustrates, the extreme dangers of trees to idyllic island communities have been well known since the late 1950's, yet our Mayor and Council Majority remain blind to the arboreal threat. Although anthropomorphic tree stumps may have a certain noble air about them, "From Hell It Came" teaches us that we trust them at our peril. Wherever trees roam unchecked, The Children are at risk, to say nothing of our buxom young maidens with the alluring flowers in their hair.