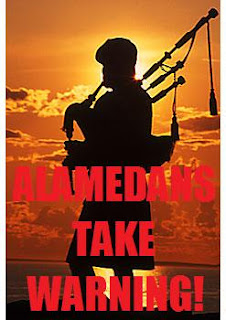 Is there really so little news in Alameda that you have to fill space by criticizing the lack of bagpipe news in a print newspaper? As the old Avery family saying goes, "Let he who is without spin toss the first caber." I've realised that your stories tend to be slanted in an anti-bagpipe direction, whereas the Fly-Swatter's bagpipe stories are informative without resorting to a great deal of personal attacks or speculation. That last one (and I believe it was actually 13 days ago, and not 12 or 14 as your story and headline conflictingly reported it) was a fine reminder of the bagpipe's role in a satisfying summer festival.

The build-up of bagpipes in Alameda is really not as great a problem as some people seem to believe. Of course, I'll be the first to admit that I don't enjoy a drive-by piping at 3 a.m., nor having to wait at a streetcorner until a procession of pipe bands clears the intersection, so that I can cross, but there are also many advantages to living in a town that supports diverse multicultural musical activity.

Editor's Comments: Maybe this addle-headed peatback, who can't even get his facts straight, hasn't been in Alameda long enough to realize that around here, we spell "realise (sic)" with a "z," not an "s," and certainly not a "zed." Why, the Alameda Daily Noose and I have half a mind to give our arch-nemesis Roy Avery a tch-tch-tching he won't soon forget, a tut-tut-tutting the likes of which he has never seen, a tsk-tsk-tsking so fierce that it that will wipe that smirk right off his freckled face! Fortunately for this Bagpipe-hugger, the other half of the Alameda Daily Noose's and my mind is so looking forward to our morning bowl of Raisin Bran and glass of prune juice that it has forgotten what all of the fuss was about. You may have won this one, Avery, but mark our words, we'll get you next time!