I am SHOCKED at recent reports that the city council is forming a sub-committee for the sole purpose of overturning Alameda's Squirrel-limiting "Measure Acorn." Sure, they SAY they are only looking at removing moldy old language from the city charter, like the provision for the "Secret Police Fund," established by an enthusiastic and very snappily dressed group of German immigrants in 1937. Well, first of all, I'm not entirely sure we should get rid of the Secret Police. Nobody knows what they're doing, but whatever it is, it must be working, because people can walk their dogs at night without fear of Zeppelin attacks. We should probably keep them around, just to be on the safe side.

Wait, where was I? Oh, right, the "Measure Acorn" sub-committee! As the president of the Alameda Cultural Heritage Education Society, I can assure you that if Chuck Corica was still mayor, he wouldn't have put up with these Shenanigans - and I will use that word, Shenanigans. All right-thinking Alamedans know about the exact replica of Mayor Corica's barber shop enshrined in the most popular A.C.H.E.S. exhibit, but not many know what is on display in the small brick-walled courtyard out behind City Hall: 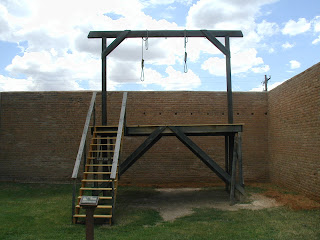 Although Chuck Corica never actually used these during his administration, everybody knows that if anybody had even THOUGHT about forming something like this "Measure Acorn" sub-committee, they would have been strung up faster than you could say "shave and a haircut"! The very fact that he was ready and willing to do it meant he never had to. Unfortunately, today the Chuck Corica Memorial Gallows are just another moth-eaten A.C.H.E.S. exhibit, and the only Noose that evildoers today have to fear is of the Alameda Daily variety.

It's hardly tasteful, but I'm not sure I see the racial issue that people are talking about?

We don't know what's going on, but this page has been receiving so many visitors that it has twice clogged the main tube in our interweb. It's a good thing we always keep a bottle of 184-proof solvent right here on our desk for just such emergencies!

Although we have no actual evidence, we are nevertheless certain that this is the work of one Luna C. Chillwether, who tipped her hand by sending us the following letter to the editor:

We urge you, our loyal readers, not to muddy the waters of your thoughts by actually reading Mrs. Chillwether's letter, but rather to skip straight to our Editor's Comments at the end, which will tell you exactly what you should think.