¡Scoop! South(west) of the (Clinton) Border

The Alameda Daily Noose and I recently received this hot tip from Mr. Herb Albert of Tijuana Brass Band fame:

I wanted to alert you to a BLATANT violation of Alameda's bagpipe limiting Measure Angus that I personally witnessed this morning. Perhaps, an enterprising reporter such as yourself, could record and expose this flagrant outrage. I witnessed this outrage in front of 887 Cedar Street, just southwest of Clinton. Because we don't publish for another week, I thought I would turn over this scoop to the Island City's leading noosewriter.

All the best,
Herb Alpert

Eager to catch a Bagpipe violator plaid-handed, we rushed to gather our gear almost as soon as we'd finished enjoying our three-day weekend, and sped to Cedar Street in the Noosemobile.

At first glance, there seemed to be nothing amiss at the address in question. As we scanned the scene with our keen journalistic eyes, we asked a passerby if she had observed any Bagpipe activity there. Oddly, we heard no response to our question. Then we remembered that we were still wearing our Bagpipe-proof ear protection. Once we could hear our source, she told us that she was not aware of any Tartan violations on that street, although she did mention that one of her neighbors on Clinton owned an egregious set of Dress Stewart knickers, which should probably be reported to the proper authorities.

Just as we were beginning to think that there was nothing nooseworthy to be found, a chilling sight arrested us. Lurking behind some foliage was an actual shrine, not to Bagpipes, but to Squirrels! It included a basin that was clearly designed to catch the blood of innocent children sacrificed to the greed of tree-loving, caber-tossing, plaid-wearing, Bagpipe huggers! 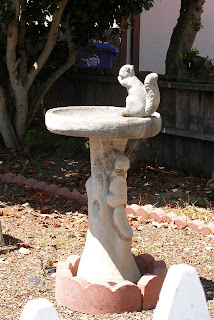 Surely, this is what had Mr. Albert so alarmed. We can understand how, in an agitated state, he could have made the mistake of confusing Measure Acorn with Measure Angus in his report, especially since the two laws are intertwined in ways best not described in a family noosepaper. He must have also misstated the address, as this monstrous blight was clearly on the property of 885 Cedar, and not 887.

Of course, Mr. Albert is just an honorary cub reporter for the Alameda Daily Noose, so we can't blame him for making such common, rookie mistakes. In fact, if he keeps up the good work of alerting us to potential scoops, he may one day achieve the exalted status of soon-to-be-award-winning journalist.

We heard that Mr. Albert did, in fact, win some kind of award recently, presumably for his latest jazz album. We haven't seen that for sale anywhere yet, which might explain what he meant by "we don't publish for another week," but we look forward to hearing his latest work soon.