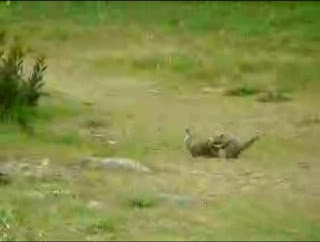 After all of last week's hard-hitting, non-Squirrel related stories and other Noose items, there should be no doubt in anyone's mind that the Alameda Daily Noose and I are not obsessed with Squirrels. However, if we needed to prove that fact, we could do so simply by pointing out that we did not report at all on a number of recent minor Squirrel incidents.

For example, it's been a whole year since the skirmish between splinter factions in the Squirrel ranks that is documented in the video above, and we haven't even mentioned it once! Had it not been broken up by the timely intervention of a heroic Pigeon, the fight could have developed into all-out war, or at least something of great significance. And after all, items of great significance are the only kind that we publish.